This is what you do on Black Friday when you have a farm and you want to eschew the consumer craziness all around. You go out on your place and work all day putting in a handsome looking 16 ft welded gate. Not a bit of money was spent at a mall buying stuff that will be thrown away by June next year. We hope to hang on to this for a good long time. 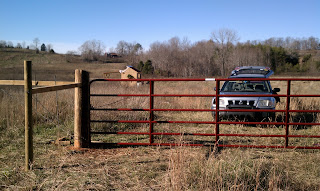 Every now and again, I get challenged when I tell folks that I am farming organically. The last one was in the parking lot at a major home improvement store in town.  The employee who was helping me load some bulky items was sneering at my "Support Organic Farming" and "Beekeeper!" bumper stickers.  He asked me if I was one of those tree hugger types, and really deep down I just wanted to ask "why aren't you?".  Instead I tried to flank his argument by a bit of reverse psychology. I told him that I was just farming "the old way".  For me the old way is just at the edge of the Edwardian period. The pre-petroleum era.  I farm like your grandpa used to. For some reason this appeals to the grouchy, anti-hippy type that seem to oppose what I am doing based on the mistaken idea that I am somehow doing something aberrant or weird.

I was flying to Germany this spring and watched a very astonishing film on my little personal TV on the back of the seat in front of me.  It was a science show that started off talking about the wonders of modern genetic sequencing and what it has discovered.  Apparently there is a great deal of what scientists once considered "junk" DNA in the human genome.  Now with the aid of computers these scientists have discovered that a percentage of the junk is actually DNA that belongs to virus and bacteria. Whut!?! The scientists go on... over the years, humans have been infected with special types of these bugs that are able to penetrate the cell wall and nucleus and insert their genetic code into human the human DNA strand. Now this bacterial DNA is a part of what and who we are. http://www.rochester.edu/news/show.php?id=2963

Astonishing. This means that as we go along, we can potentially encounter a virus that can change what and who we are. And, we can pass this on to our offspring. Now this is the sunny side of the story if that is at all possible.  The down side is that over the years this may have been happening a lot, and some of the cases where virus insert their DNA may occur in a bad way, producing a genetic defect that is fatal to the human host. We are porous.

So you may ask what has any of this to do with organic farming? I point straight at the work of Big AG and their bio-engineering of new species. This type of viral or bacterial gene insertion is what they use to put fish genes plants or bacterial genes in corn.  These same companies are very interested in protecting their laboratory investment by also inserting a DNA marker that shows up in testing so they can detect the special DNA when they think someone is stealing their special corn.  They take samples of the crop they think is stolen and look for the unique DNA flags.

So, what is wrong with this?  From my point of view, crops aside, if humans are susceptible to DNA modification, how do we even know that what we do with plants won't cross a boundary into us?  Yes, being a technical person, I can appreciate the scientists who say that it isn't that kind of bacteria or virus that infects people, and that they have it totally under control. That's what Frankenstein thought, or ignored, when he made the monster, and the monster turned out to have its own will in the end. Some of our greatest ecological and human disasters have been preceded by arrogance and greed.

And now to the other side of the story. You are what you eat. Did you know that if you donate a strand of hair they can tell how much corn you have in your diet? It turns out that most of the human diet is corn, especially if you eat processed food. When the government subsidises corn it makes it a very cheap component and most food processors love cheap components. Plus, when you grow that much of anything, you have to find a place to put it. You put it in cars, in plastic, in soda, in cakes, in chips, in cooking oil, in starch, into the stomachs of school children.  You put it into cows, that just aren't made up to digest the stuff.

The chemical signature of corn comes up through the food chain and rests in our tissues as the critter at the top of the food chain. The unconsumed consumer.  The guy in the middle of the scientific hubbub and shown in a part of the movie "King Corn" is Stephen Macko http://uvamagazine.org/features/article/the_hair_detective/ .   He demonstrates that if a cow is fed corn, the chemicals (isotope of carbon) specific to corn accumulate in the cow's tissues. We eat the cow and other corn products, and those isotopes accumulate even further in our tissues. This is well worn adage "you are what you eat" smacking you in the face. Do you get it?  I do. The same goes for soy, and there is a low hum, a growing suspicion that components of soy accumulate in the tissues of our food animals (chickens and cows).  Some folks with soy allergies state that they can also be allergic to chicken and eggs if the chicken ate soybean meal. The chicken is porous.  The animal is not merely a tube with a torturous path through which feedstuffs pass and come out the other end all pulverised with basic raw materials being absorbed on an elemental basis. The chicken's body, and ours absorb and store entire molecules be they natural or  factory made, some that are not so good for us.  So when you consume toxic (pesticides or synthetic fertilizers) or even borderline toxic materials (proven safe at low levels) they can bio accumulate. In other words, they can stay in your tissues for a really long time.

Frightening stuff now to know these things and relegate my nourishment to Corporation X.

So my dear sir, yes I am an organic farmer.  Why aren't you?
Posted by Sewing Machine Girl No comments: