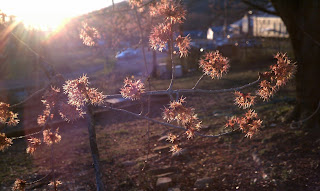 Folks, it is officially over. Yes, my journey into maple syrup in TN is done for 2013.  The maple trees are now blooming and sap is no longer running.  I can hardly describe my happiness at discovering the massive ancient maple trees at the farm.  While growing up in MA, I had tapped maples with my father.  I never thought it possible to do such a thing so far south, in such a warm climate.  It is possible and we succeeded. There is a history of maple sugarin' in this part of TN. Most would associate maple syrup with Vermont or New England, but I am stubborn.

I mail ordered some taps from Canada.  Spiles they are properly called.  Stainless steel, the old fangled type that have hooks to hold buckets.  Nowadays many sugaring operations use tube lines and trees are interconnected to the downhill container collecting the sap.  Not for me.  I have to keep things as simple and critter proof as possible.  I used the method proven by my dad.  It takes a spile, a short section of tubing and a milk jug for each tap. We collected just over 16 gallons of sap from the few trees we used. 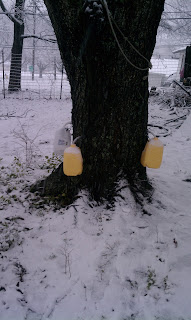 This tree is over 30 inches in diameter and supported 4 taps. For those of you tempted to be more natural than natural...DO NOT USE ELDERBERRY BRANCHES as taps.  Elderberry stems contain a toxin akin to (or may be exactly) cyanide, and this is not something you want to ingest after concentrating it down by boiling.  Don't poison yourselves folks. 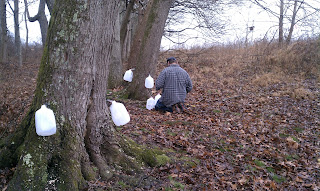 All along the back of the fence line are many magnificent ancient maples.  The sap flowed well for a couple of weeks.  I watched the weather for days above freezing and nights below freezing.  The tell-tale was the sap weeping from new woodpecker holes in the bark of the maple trees. It was time to tap.

We knew we were not going to make a commercial effort at maple syrup production.  Most small farm efforts are best served by staying small.  We saved up 16 gallons of sap and began to reduce it down.  It took most of a weekend and probably far more stove gas than I care to account for.  But, the result was a quart of the finest tasting, but dark grade of maple syrup.  It is a fine treat for the children (and adults), whom are on their third maple syrup and pancake breakfast with this batch.  It is a fleeting sweet indulgence, in the most improbable of locations. 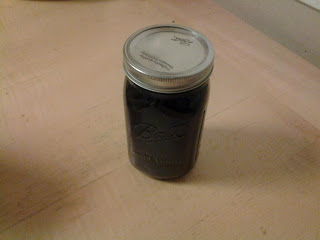