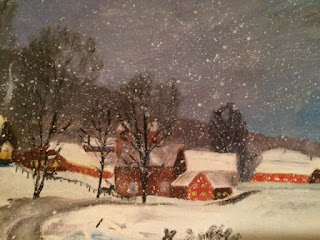 Today is Winter Solstice, the shortest day of the year. We climb out of darkness tonight, and enter the deeper part of winter. I love the concept of hygge and what we can do to push sadness away in the darkness of winter.

The piece above is my own student artist study of a piece that appeared in Yankee Magazine sometime in the 1980's.  I've always been fond of the New England farm scape in winter.

A clean dairy barn is a warm, sweet smelling and comfy place in the dark of winter. Cow-heated cozy.

Hope your woodpile is ready. 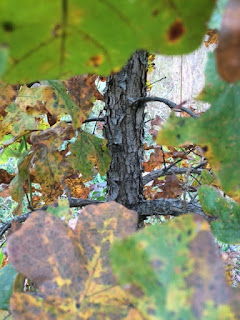 Fall passes before our eyes. Winter Solstice approaches and the cold weather is nearly upon us.
Posted by Sewing Machine Girl No comments:

I have shut down my Facebook profile. No, I didn't delete I just ghosted out.  A couple of "bye" notes to some of the people I enjoyed interacting with and just left. I have reached my psychological limit of unfettered hate, uncensored verbal diarrhea
and unchecked privileged rhetoric and racism.  Enough!

It is really something, that we can experience such anger on social media.  There are a few articles from psychologists about this issue.  The article I read in Scientific American is a quick treatment of the topic.

I really feel like it is breaking our society somehow, or creating a parallel universe where there are another set of social rules entirely.  It has become un-fun (grammar trolls jump in).

Some observations;  trolls or FB angries are super competitive- they want to win the exchange, and it is no holds barred. There is nothing off limits, insults, name calling, threats, all possible and on the buffet of choices.

You can pick your friends or you can pick your nose;  If I ever go back, I would cut down my friends list, not to those whom agree with me politically or socially necessarily, but to a list of those whom are willing to engage in discussions with the same rules I have set for my self. Not that my rules are better, but it is my basis for interaction and emotional comfort. You have a basis too, use it. Just like you walk away from the woman ranting at the checkout lady, or the street preacher telling you that you are going to hell, or the drunk in the bar that asks for your phone number after falling on you. Just walk away, digitally.

No one ever changed political ideology because of what another person posted on Facebook;  you become more of what you already are, and follow the path of the tendencies that you already present. Sorry to say, but insulting someone makes them grip stronger onto the belief they already had, it will NEVER make them immediately switch sides and agree with you, NEVER. Works that way face to face as well, which is refreshing, at least one crossing point of virtual and physical society. It takes quite the awakening personally to completely switch ideologies. Not sure that Facebook is the medium for that.

No one ever became a vegan/meat eater because of what another person posted on Facebook; see above, give it up. Please.

When someone in a crowd is ranting, people make faces and cross their arms;  digitally, it is impossible to see these social cues that keep a lot of people in check.  Even in one-to-one discussions we are continuously gauging the response of the other person, looking at expressions and body language. There may be dozens or hundreds of people sitting behind their screens and keyboards, scowling and crossing their arms because of the comments of a troll.  There is no emojii for that. So these silent hundreds that in personal interactions, could visually communicate their disdain of the rant, perhaps have made a choice to not jump in. In addition, the troll or ranter knows they are untouchable, there is no recourse for their statements.  The people they attack, they will never see in person, their boss will never know how rude they've been (usually), and there is no emotional debt that must be paid for even the most evil statements to someone. The troll or ranter is unknowingly benefiting from "silence implies consent".  He/she believes fully that they are winning.  Meanwhile, dozens of people are saying "ugh".  There is absolutely no social pressure, nor social cost for the troll online.  In person there is a high social cost to behave this way, even to strangers. Must.have.the.last.word.

No doubt it has been fun too.  I have met a great deal of really wonderful people, and learned a lot. I was able to catch up with some high school people I knew, and could see their families now. Pretty good stuff, but not sure it was worth the experience.