My To-Do list got the best of me this year.  Or perhaps it was luck?  Just as the Midwest is reeling and crops are dying, we in East TN are having climate issues as well.  The month of June, I recorded only .65" of rain for the entire calendar month.  That is terrible I must tell you, plus for a good part of the month, the daytime high temperatures were over 100 F.  Almost unbearable to work in.  For sure impossible to grow corn in without irrigation.

In 2011 I planted about 1/4 acre in Oxacan Green Dent Corn.  I got it from heirloom seed sellers.  My hope was that I would be soon filling my corn crib, and building a seed bank to plant with continuously.  I saved two bursting 1 gallon zip lock bags with the seed product of that 2011 crop, fully intending to replant and expand in 2012.

I never got it planted.

Too much infrastructure building going on.  Too much bush hogging to do.  Too much of too much.  Not one kernel of green corn got planted in the ground. 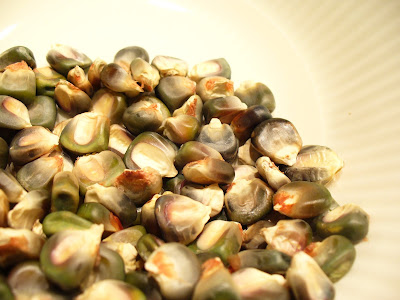 I never thought I could ever be so lucky.

The farm has no formal irrigation system.  The system is me with buckets.  There is no way I could have kept that crop alive through June, July and August without mechanical/petroleum powered irrigation.  I would have lost every last kernel in the weeks of 100 F and higher heat.

Now my two bursting gallons of corn seed are safe and tucked away in cool dark storage, waiting for next year. [Yes, with proper storage corn can be kept for decades, perhaps centuries as was discovered in the desert southwest]

So, a failure turns out not be a failure after all, but merely another chance to gamble with nature next year.